INSIDE: Roam the Gnome’s Guide to the Best Australian Food Gifts & products including the Aussie crowd pleaser, Vegemite.

Try telling the average Aussie that there’s no such thing as typical Australian food, and you’ll have a riot on your hands.

Australia has a growing list of fabulous food products that are beloved by its’ people.

There’s also some Australian recipes that cannot be replicated properly without the right Australian ingredient.

Lots of people ask us:

So we’ve collated the best Australian food products list of what to buy in an Australian supermarket.

You’ll find the best things to buy in Australia including:

Take a look below at our monster guide to what to buy in Australia for ALL the details.

Disclosure: This article contains affiliate links. If you make a purchase after clicking on one of these links, we may receive a small commission at NO extra cost to you. Main image credit:Charlotte in Australia 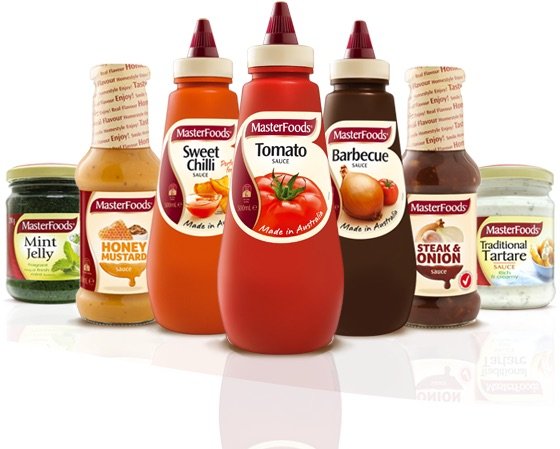 Correct at time of publication on Roam the Gnome. Please check with venue for updates. We apologise in advance if there have been any changes we are unaware of. All prices in AUD dollars, unless otherwise stated

The best gifts from Australia for foodies is something from the supermarket aisles, or a hand-crafted gourmet food gift from the local markets, so you can make these classic Australian dishes and drink up the local faves.

First up, let’s take a look at the most popular Australian food for breakfast, lunch and dinner.

Below that, you’ll find a list of the best Australian food gifts & Australian snack souvenirs to buy for friends and family. 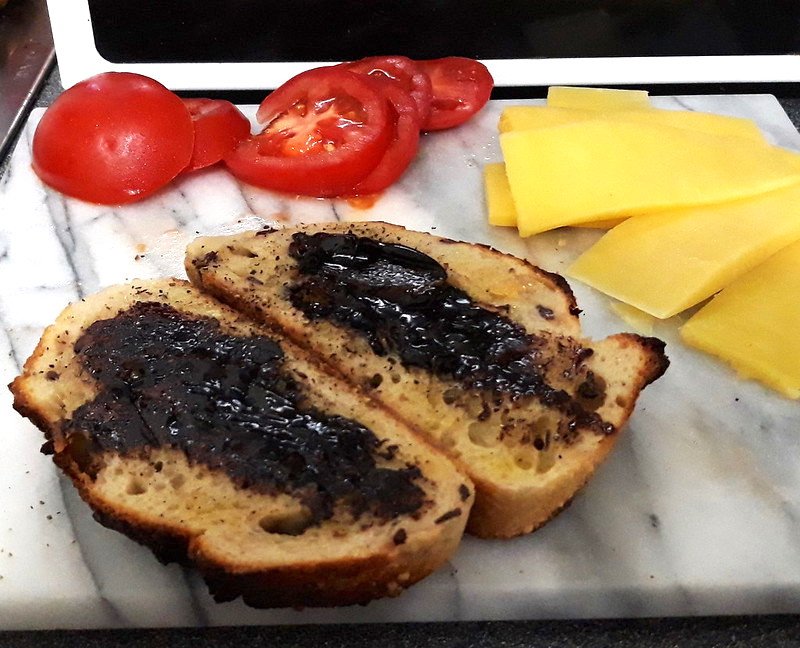 Here’s a traditional Australian food list, starting with how Aussies begin their day at breakfast time.

No.1: Vegemite on toast

Vegemite on toast (otherwise known as the Australian brown food paste) is an acquired taste!

Vegemite is an original Australian food you won’t find anywhere else.

But one Australian babies grow up on.

Nothing beats a scraping of vegemite on toast, with a hot cup of tea, first thing in the morning.

It’s also the equivalent of chicken soup in medicinal terms for Aussies.

No.2: Smashed avo on toast

A bit of avo, smashed over white toast or fancied up on thick cuts of sourdough, is another Aussie fave, especially with the twenty-something set.

Rumour has it that if young Aussies stopped buying smashed avocado on toast at their local cafe, they might even be able to afford to enter the Australian housing market. Best to make it at home to save the dollars!

Bacon, eggs, grilled tomato, baked beans, a sausage or two, with toast is called a “Big Brekkie” or Fry Up.

Find it on every country town’s motel menu.

No.4: Nutella on toast 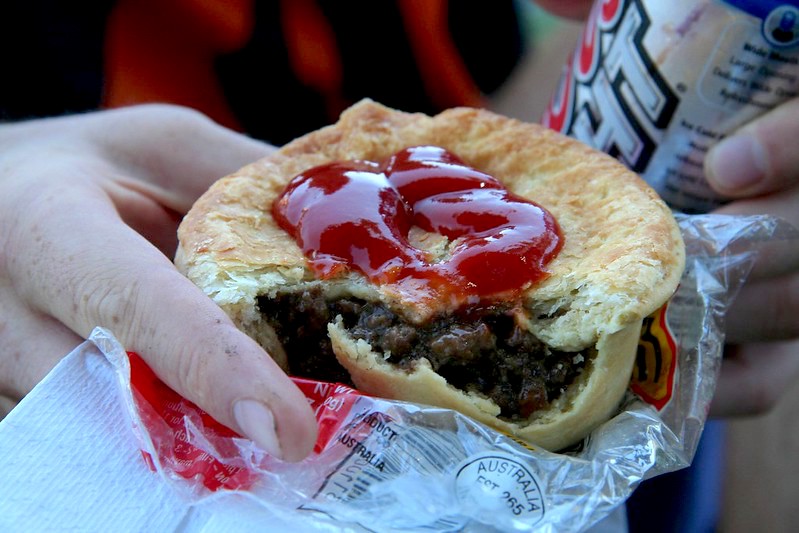 Have you tried any of these classic Australian foods?

Typical dinner meals in Australia (especially at a pub or club) 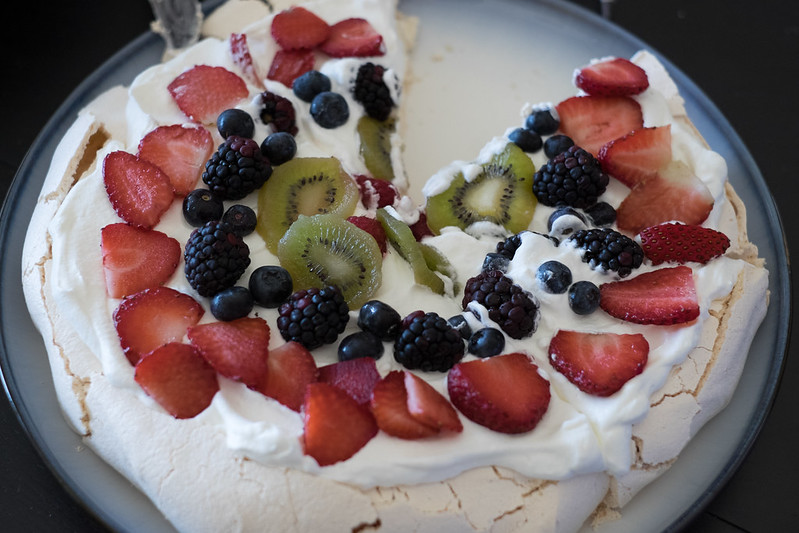 A meal is not a complete meal without a slice of pavlova, or apple pie and ice cream. 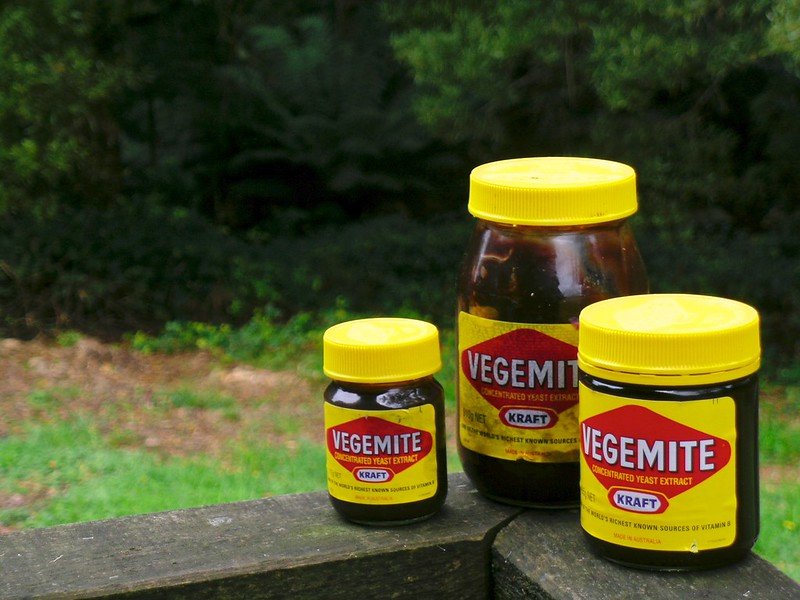 Here’s the guide to the best Australian foods to send overseas.

Start here with authentic Australian food products to use in home cooked meals.

All of this most common food in Australia can be found in almost every kitchen or pantry.

BUY NOW ON AMAZON: The BEST EVER Vegemite spread 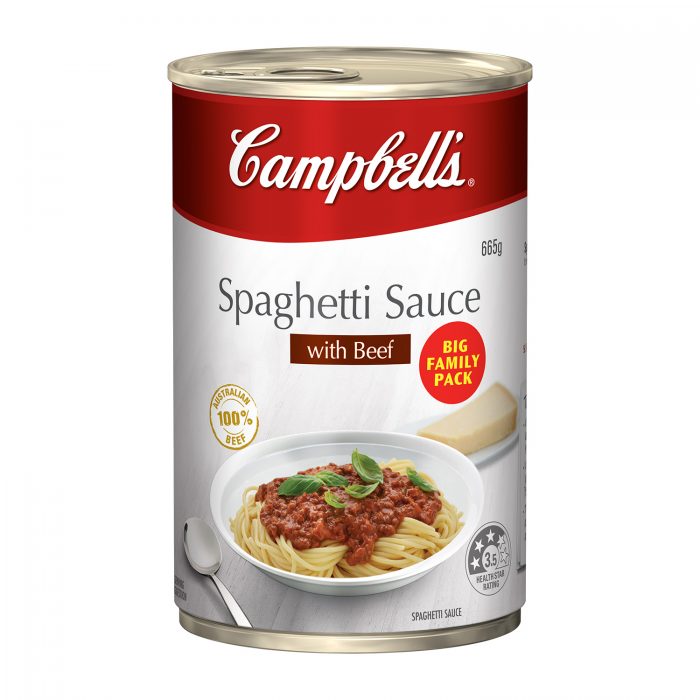 I cannot live without this stuff.

It’s a childhood memory flashback of good times with the cousins. 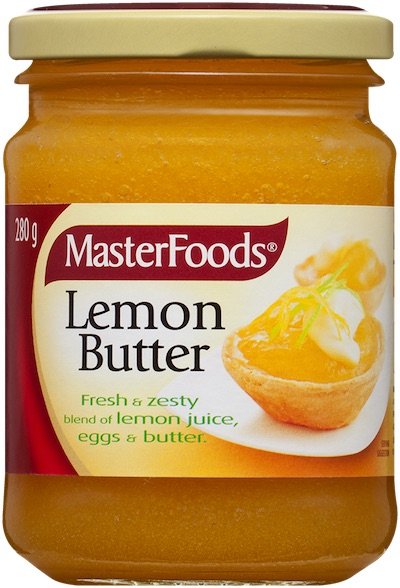 These are some more famous Australian products loved by Aussies. 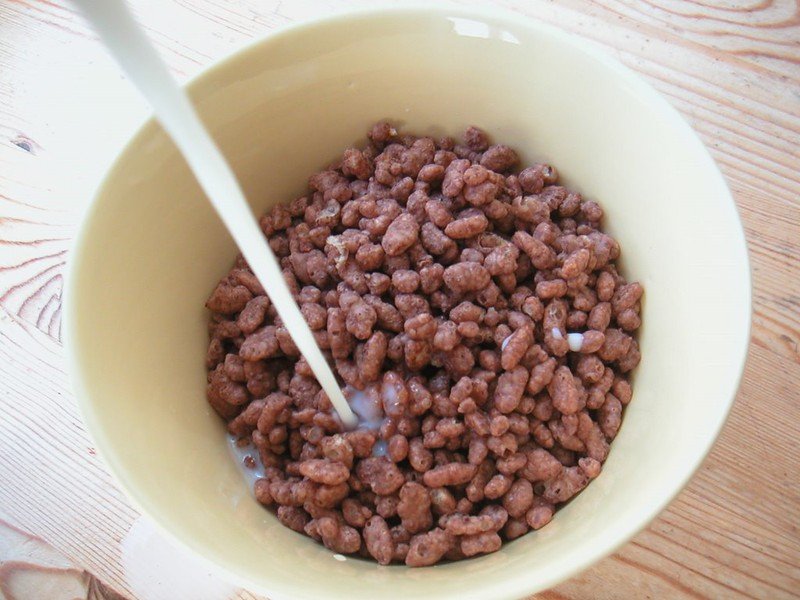 Kids love Nutri-grain, Rice Bubbles, and Milo cereal, but the winner of all breakfast cereals in Australia is:

Coco Pops are “Just like a chocolate milkshake, only CRUNCHY!” 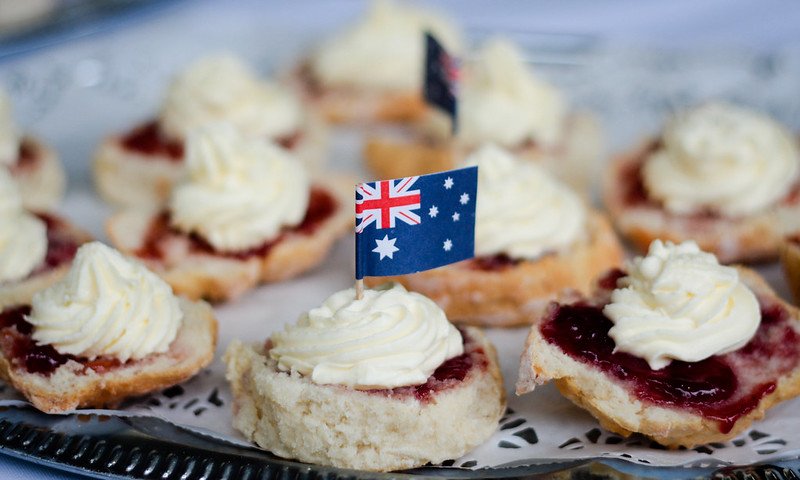 More of the best Australian snacks include:

Hot tip for scones: Always put the jam first, then the cream. That’s the unspoken rule. 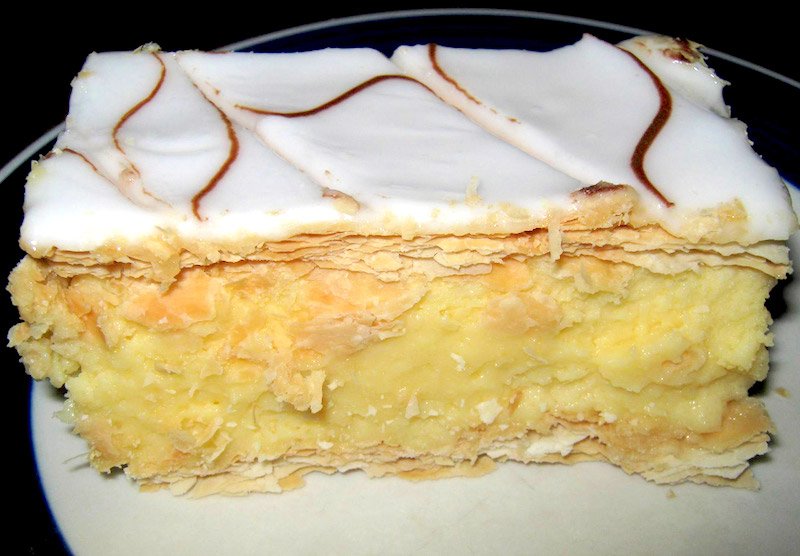 No.5: Popular bakery items in Australia

If you head to a bakery in Australia, choose one of these for a real Aussie treat:

RELATED: Brunswick Heads Bakery near Byron Bay has huge servings of ALL the Australian cakes & desserts 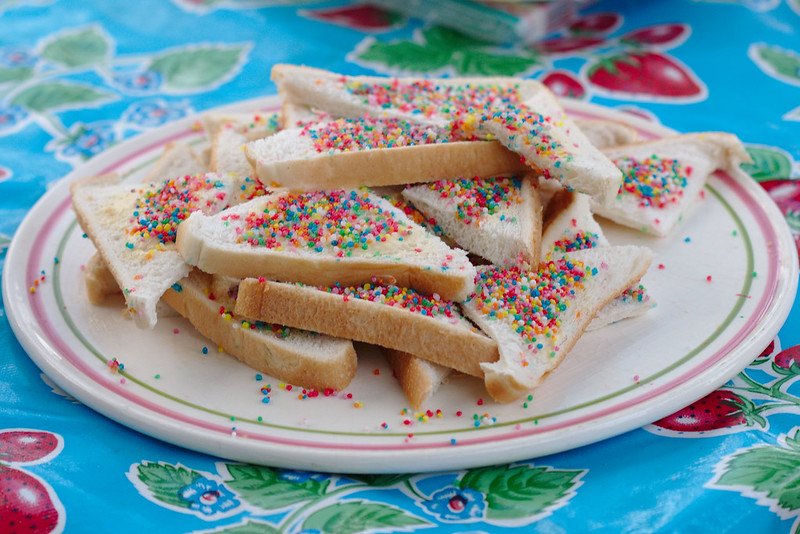 You’ll find “Fairy Bread” at every Australian birthday party for kids, except in Byron Bay.

There you’ll probably find a raw vegan cake on the table.

To make fairy bread, buy a fresh white loaf of bread, spread each slice with a good layer of butter, and generously sprinkle on the ‘100’s and 1000’s until the bread is covered.

Hot tip: Cut the bread on a diagonal, so you make four small triangles. 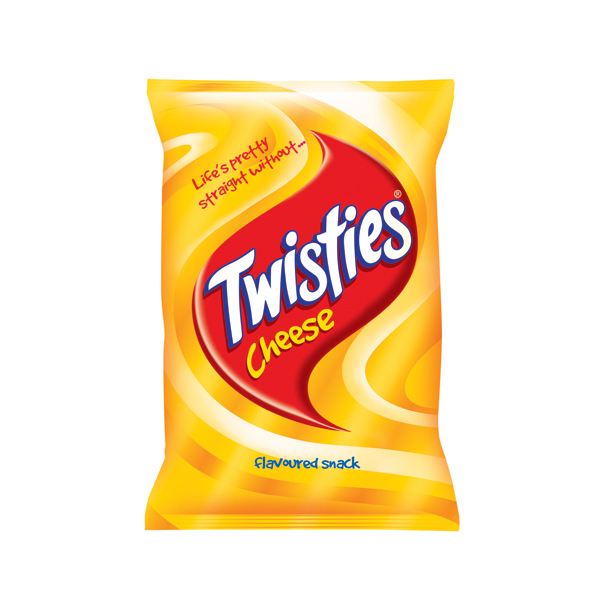 Cheese Twisties are always in the top 3 when you rank the best Australian chips.

The number one request for Australian food sought by expat Aussies with visitors on the way is TWISTIES.

You should also buy, and TRY these Aussie snacks:

But we’ll always come back to the old favourite and vote Cheese Twisties as the number one item to put into your suitcase anytime you leave these golden shores.

BUY NOW:  The One & Only CHEESE TWISTIES 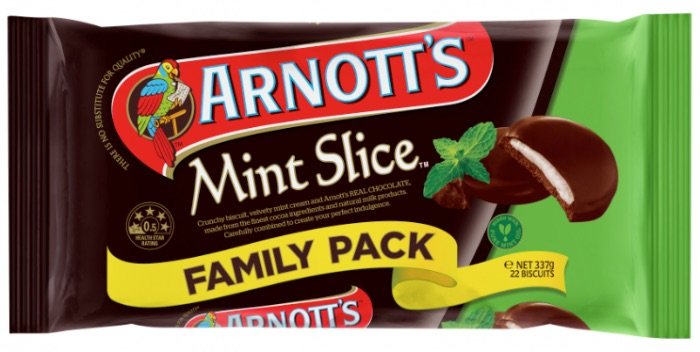 Tim Tam Biscuits are by far the most well known biscuit in Australia but take a peek in any Australian trolley, and you’ll find these Aussie biccies too – Arnotts Mint Slice.

(Arnott’s is Australia’s favourite biscuit company, and one of our iconic Australian food brands. Don’t stand for the imitators.)

Buy at least one pack of each of these well known Australian food treats!

TimTams and biscuits are good Australian snacks to send overseas.

Put these Australian biccies in your shopping trolley too!

THIS is how you eat Tim Tams in Australia.

It works with any flavor Tim Tam biscuit.

PS: Biscuits make great Australian food to send overseas, along with snacks, and lollies, so don’t be shy. Pack more Aussie treats than you think you will need.

Make up a care package for your besties overseas today!. 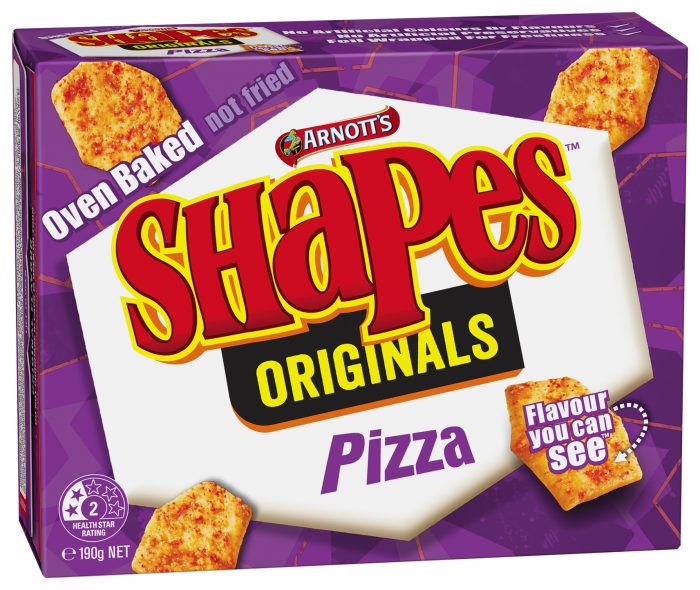 Try these savory biscuits in Australia too.

Arnotts Sao biscuits with vegemite and cheese are good for kids lunch boxes too.

As mentioned, Arnotts Shapes biscuits are a party staple.

They are one of the top Australian foods you’ll see at any kids party, bbq, or picnic. 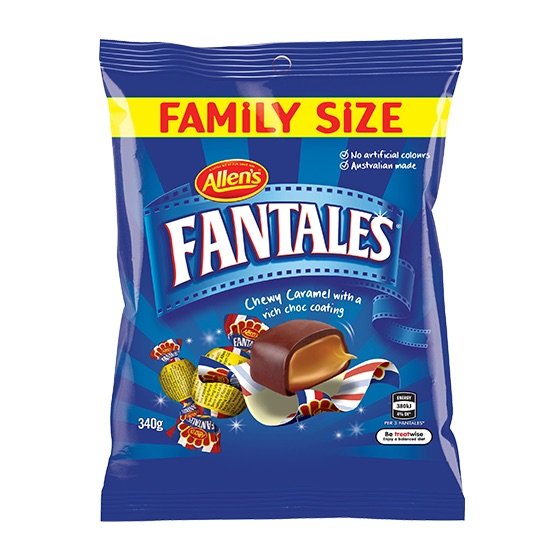 Australian lollies are SO good!

FANTALES (pictured above) are individually wrapped pieces of chewy caramel fudge cubes coated in delicious rich choc.  There’s a story on each wrapper!

Try these popular Australian sweets at least once.

Buy enough of these sweet Australian food products to share around, and a few more for late night nibbles.

Cherry Ripe, mushed up cherries covered in milk chocolate, is made by Cadbury but only sold in Australia.

You either like it or you don’t, but if you do, buy up big.

Fill your suitcase with Australian chocolate bars like this too, and you have the perfect Australian souvenirs for everyone:

You can also buy Aussie chocolate share packs, with 12-20 treat size pieces of your faves. 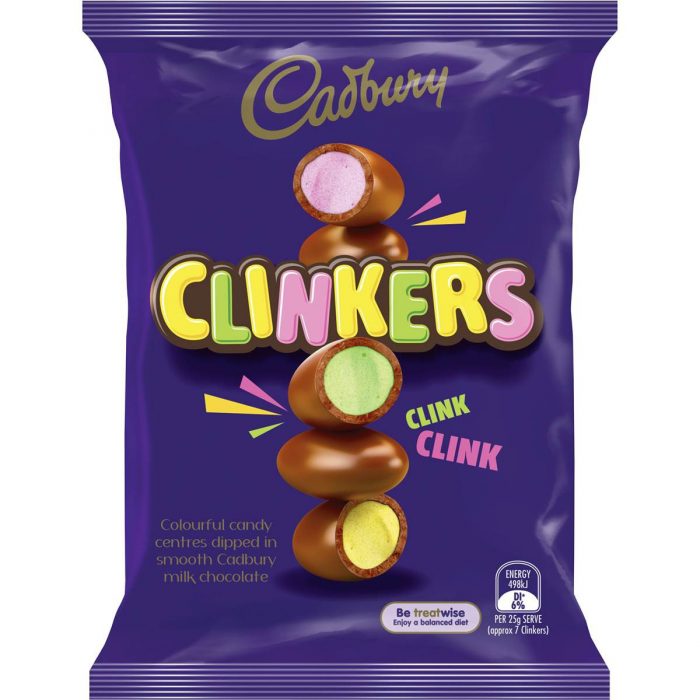 It’s Australia’s version of the the New Zealand Lolly Cake. 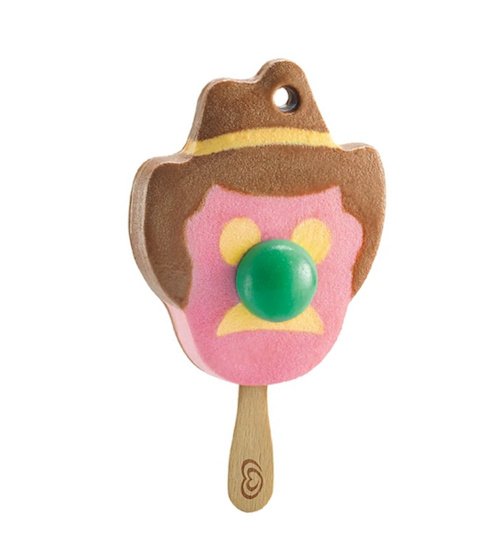 Followed by Paddle Pop ice blocks in these flavors:

Made by Streets, these Paddle Pop ice creams are iconic! 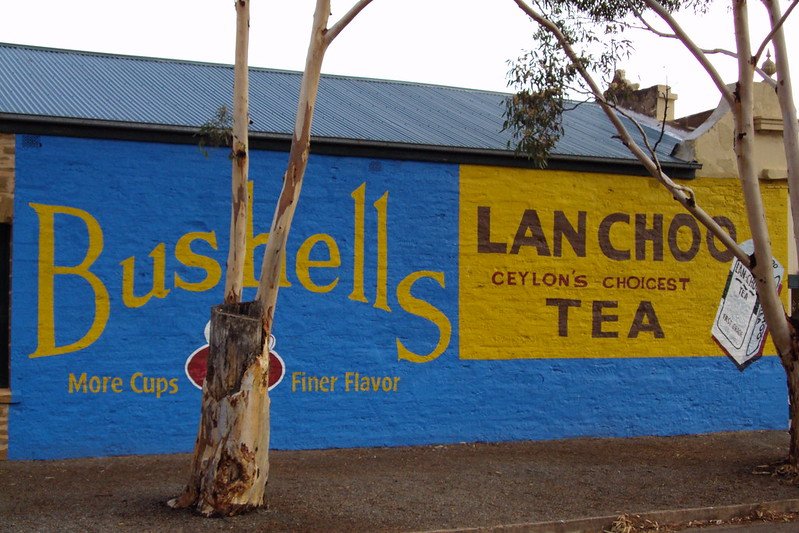 These are the most popular Australian drinks, for both summer sipping and rugging up on a winter’s night. 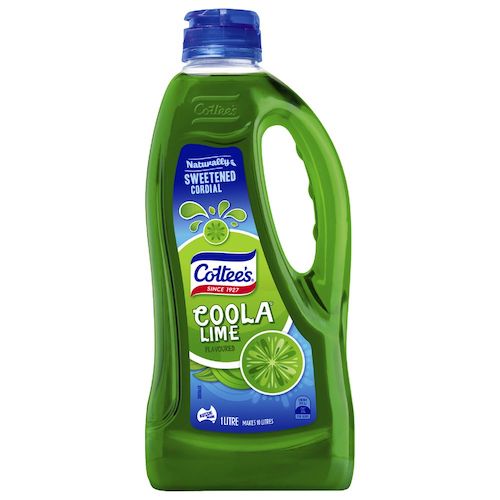 Australian’s are MAD coffee drinkers, and you will find a QUEUE outside any good coffee shop from around 6am to 9am. Some people do brew their own beans at home, but it’s now part of the culture to buy a good coffee on the way to work.

Very rarely, and only when left with no other option, Aussies will drink an instant coffee.

But expat Aussies will not say no to a jar if it means a taste of home.

It’s the nostalgia that does it.

Tea on the other hand is a very popular drink to make at home for many people, a habit adopted from the big English migration here in the 1950’s and 60’s. 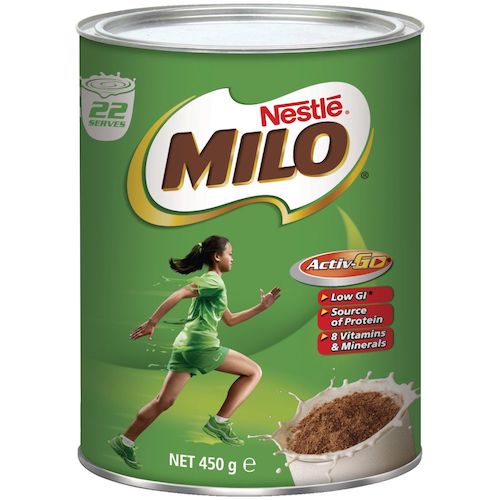 Take a bottle of Australian made Cottee’s cordial home for the kids, or a BIG tin of MILO and you will be a hero!

Kids need Australian treats every now and then, don’t they? 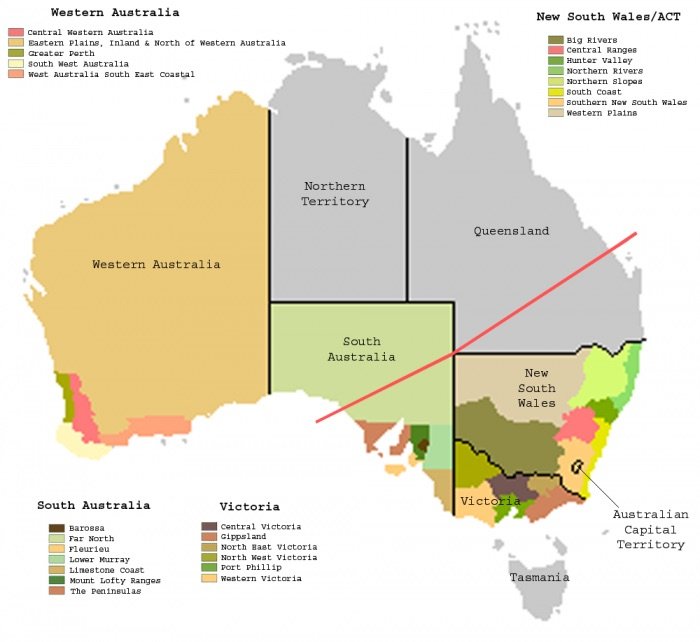 Here’s a link to the best 50 Australian wines of 2018, as voted by Wine Selector magazine.

This is as good a place as any to start your wine tasting journey in Australia. 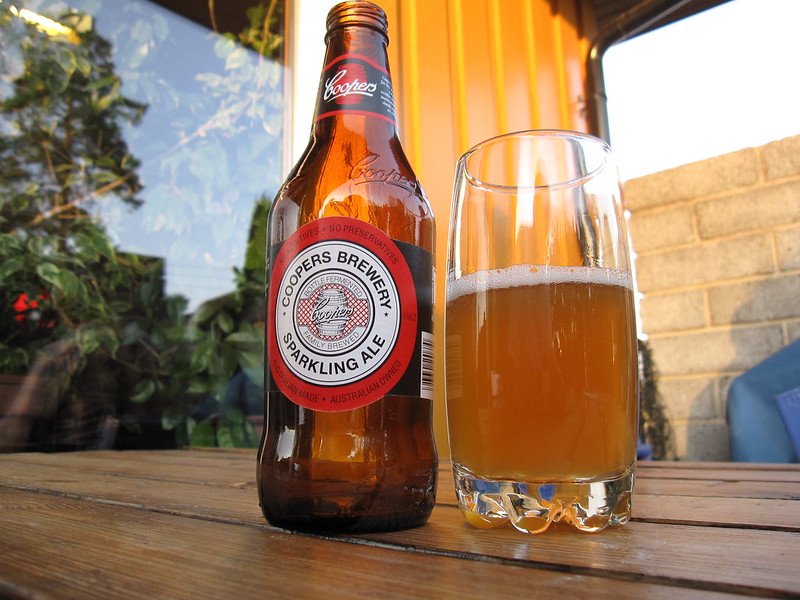 These are the most popular beer brands in Australia.

Stone & Wood Brewery in Byron Bay is a boutique beer brewery with a growing reputation as one of Australia’s best craft beers producers.

Some of the best souvenirs from Australia are food!

If you want to make up care packages of the best Australian food to send overseas, be sure to include: 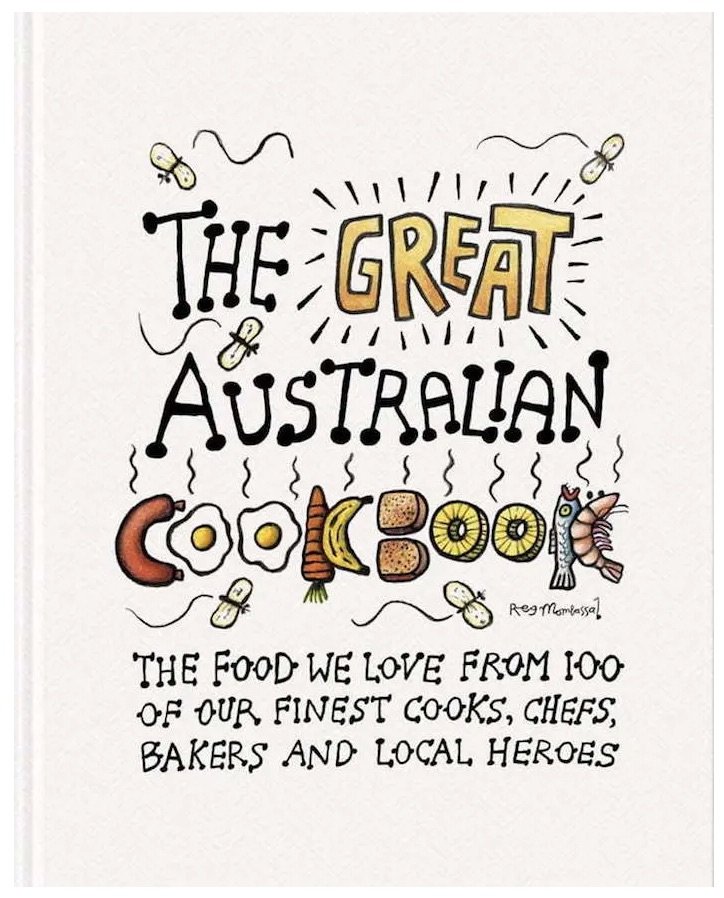 These recipes were all cooked in the kitchens and homes of the recipe makers and photographed in situ.

The Great Australian Cookbook is a joyful collaboration of more than one hundred of Australia’s finest:

No.1: Australia was the first place to taste Peanut Butter

Peanut butter was first released commercially in AUSTRALIA by Sanitarium Foods back in 1898, the first country in the world to taste this new spread!

No.2: The Lamington is the National Cake of Australia

The Lamington, named after Lord Lamington (a former Governor of Qld) is known as the ‘National Cake of Australia’.

The vote was cast by the National Trust of Queensland.

No.3: Pavlova is named after Anna Pavlova

Pavlova was first created in the 1920’s as a gesture of goodwill towards visiting Russian ballerina, Anna Pavlova.

Australia and New Zealand fight over who made it first, but we can safely say it’s a draw.

It’s the national dessert in both countries!

Want to have a go at making it yourself?

Start with the magic Pavlova egg

It’s the trick to a perfect meringue base.

No.4: ANZAC biscuit got its’ name in WWI

The famous ANZAC biscuit, made from rolled oats, butter, sugar and desiccated coconut were made famous as the biscuit of choice for the Australian and New Zealand soldiers fighting World War I.

These were baked by the women at home, and sent via ship to the fellows in the front line, a welcome treat and sustenance for war-weary battlers.

There are over 5000 native food species in Australia that fed the Indigenous Australian population before white settlement, including the aforementioned Macadamia nut.

You can now buy some of these bush foods in local supermarkets and deli’s, including:

Playing with Fire is another distributor. 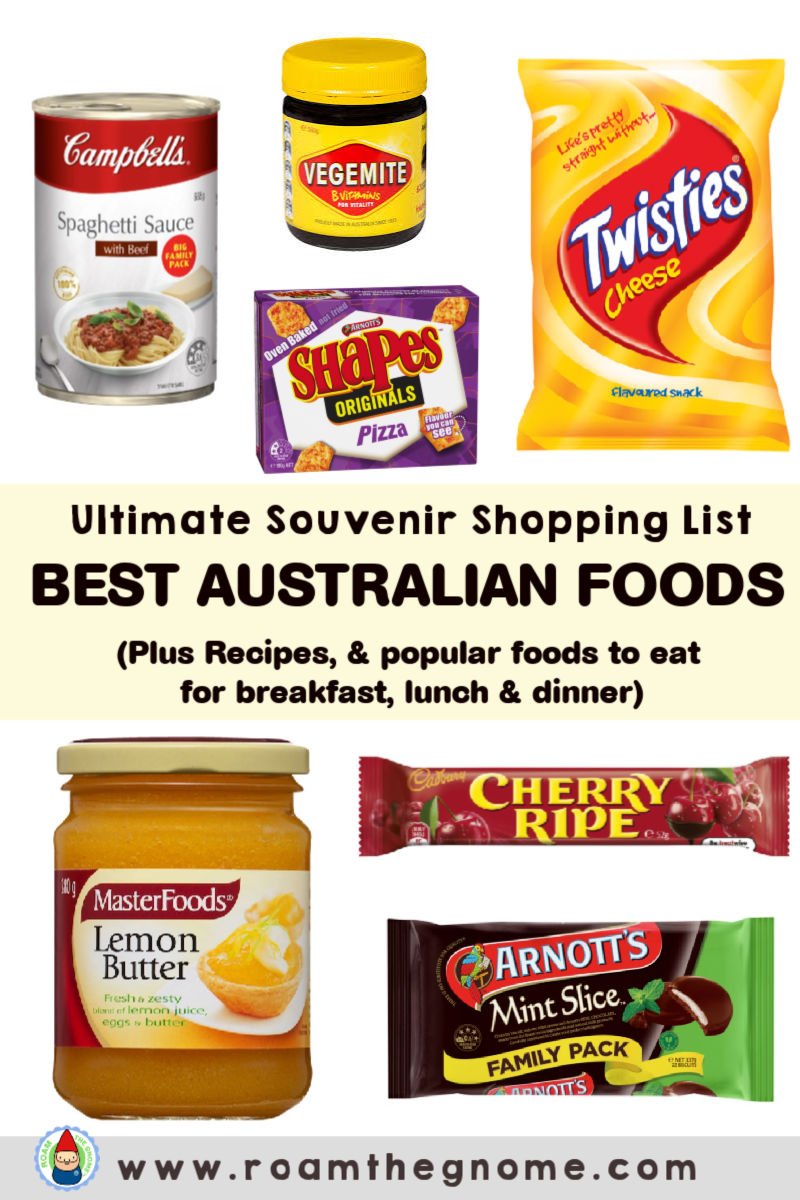 Now go and write your Australian Foods List so you know what to bring home from Sydney, Brisbane or the Outback!

Looking for fun things to do in Australia with kids?

Click the link below for more Sydney Australia tips

This website contains references to products and services from our favourite brands. Some of these are affiliate links. If you make a purchase or booking after clicking on a link on Roam the Gnome™, we may receive a small affiliate commission at NO COST to you. All information on disclosures can be found in our Privacy Policy

Thank you for visiting Roam the Gnome Family Travel™ Website Directory. Bookmark this page so you can find us again.