Australia’s most colourful playground may just be Wulaba Park Playground in Waterloo.

We call this our Jack-in-the-box playground because it’s hidden amongst tall apartment buildings, and invisible to the eye, until it suddenly pops out at you!

Designed by Sydney artist Nuha Saad in conjunction with landscape architects, this multi-level playground in a kaleideoscope of rainbow colour is like a  real-life Willy Wonka Chocolate Factory.

The only thing missing is the Chocolate River!

Zoom down the Giant Slide at Wulaba Playground!

The centrepiece of the Wulaba Park Playground IS the colossal slippery dip for the adventurers.

But first you have to climb up. That takes a bit of effort, squeezing your body into tiny rainbow-hued spaces as you wind your way up the central climbing tower. It’s worth it in the end.

What kid, big or small, wouldn’t want to have a turn on that? (Smaller ones might have to ride on mum or dad’s lap. It’s a long way up to find the start line.)

Wulaba Park Waterloo is a big surprise! There’s so much to do, and all the facilities are there too. Except shade. Not much of that.

As well as the jumbo slide, you’ll find:

Put a visit to Wulaba playground on your “Sydney Adventures with Kids” list. BYO snacks and a picnic lunch.

It’s a surprisingly peaceful playground, despite the building works going on, and one that we’d put on our best playgrounds in Sydney list. But do remember your hats and sunscreen. You’ll need them.

The Inside Scoop – Wulaba Park Playground

Nearest takeaway coffee: BYO from the East Village shopping centre across the road.

Parking: There are a select few car parks in Green Square itself. On the day we visited, there was only one car there. Make this your first try.

If you run out of luck, street parking in the surrounding area is your other option. We parked on Sam Sing street (2 hour limit, 8am – 6pm), and there were other car parks available on Archibald Ave.

Enclosed: Not gated, but off the main road

This park was last reviewed in December 2017.

Looking for more SUPER DOOPER FUN THINGS TO DO IN SYDNEY? 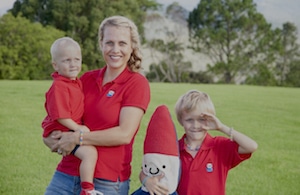